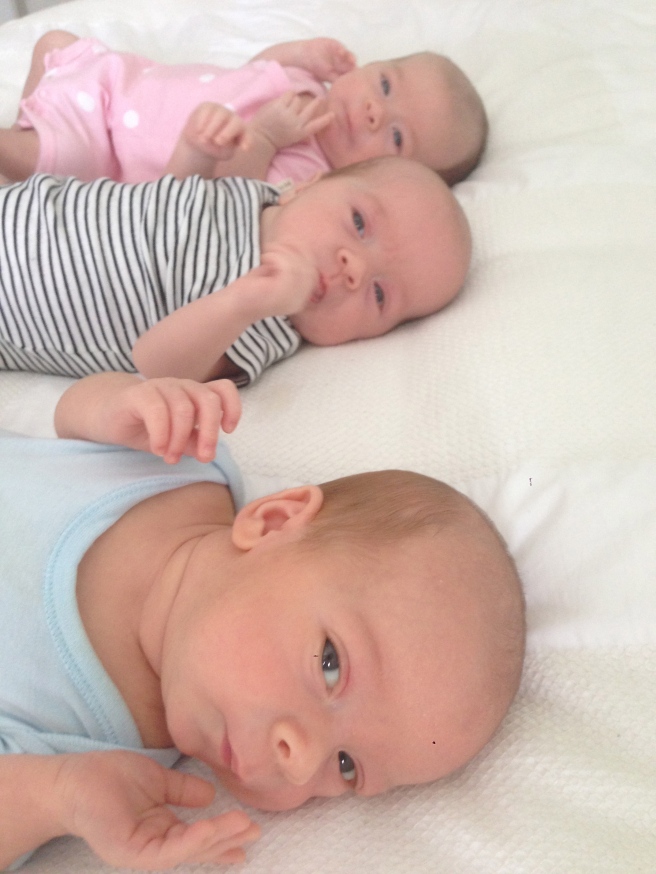 It’s time. After 3 months of bliss (although not sure if bliss is the right word), my parents are returning home to the property. Mum and Dad have been with us since the beginning and it’s all coming to an end on the 20th of March. To be absolutely frank, I’m terrified. I don’t deny, I have been living in a complete state of illusion that triplets are manageable. There is no doubt that like any new mother, my life has been turned up side down and now revolves around a baby routine of feeding, sleeping, settling and playing (x3). But the real test is about to begin.

In fear of sounding like a broken record, I really don’t think I’ll have time for the blog anymore. In fact, I’ll have little time for anything. I love cooking, I enjoy exercising and even the odd coffee outing…but soon to put on the back burner. I would however love to write a blogs on feeding, their sleep routine and how we manage with triplets for those other mums out there. So instead I’ll do a snapshot of those important parts after the end of the blog.

I’m definitely not alone post 20th of March. I will continue to have my gorgeous mother in law coming every Thursday night and all day Friday. I also have my two sister in laws helping out, some wonderful friends rostering on and have some hired help with in home care (who happens to be one of my best friends). I guess the difference will be is that it will become a military operation, I’ll be alone for feeds and will have to put up with a crying baby demanding a feed…something they haven’t really done yet.

Everyone often says, ‘You’re a superwomen’…but the truth is out there, I’m not. I am however the mother of 3 absolutely gorgeous, unique triplets who are thriving. They all have amazing weight gain, reaching all developmental milestones and have smiles that light up our little house. We are two very lucky parents to have these 3 in our life…and everyone that surrounds them.

So in other news…I’m nearly 30. Ekkk. Therefore the triple threat at 29 won’t really apply. On my birthday, I am going to change my instagram page from ’emma.leyden’ to ‘three little leydens’. If you’re interested in seeing their progress, check it out… https://www.instagram.com/emma.leyden/

So what I’ve learnt…for those other mums out there

Sleep: In the first couple of months, it was nearly impossible for them to get into a routine because they needed to do so much sleeping. Instead we tried to create habits so they knew the cues. This included the last feed to have very little distractions (no TV or us talking to them etc) and in their sleeping bag for the midnight feed. Whilst they wake every night, they know the drill and they are back down to bed in no time. We push them out until 6am to do the first feed, even if they wake at 5am. We’re trying to do the hard yards now, so we can manage later.

Feed: This has been probably the hardest part to work out. I know the rule of thumb is 150ml per kilo but we’re mix feeding them (50% breast milk and 50% formula) and they’re all different weights. So we offer them the maximum amount per feed (of either formula or breast) but we don’t force it down if they aren’t interested. Generally speaking, they will finish it off at some stage during the day.

I know this would have helped me at the beginning so here is a breakdown of our day at 3 months. I don’t think it will stay this way, with their sleeps changing to morning and afternoon, but this is what they’ve opted for so far.